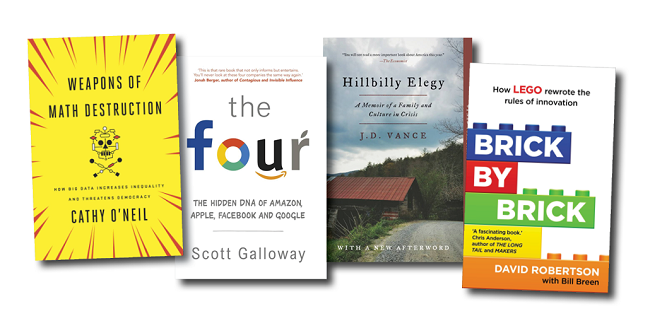 Ahh, summer. The best time of the year to relax and recharge. And to sink into a good book.

Our annual reading list has become a tradition. We read a lot about business and investing around here, and there’s some of that this year for sure, but you’ll also find some recommendations that are lighter, thought provoking or simply really interesting.

Weapons of Math Destruction, by Cathy O’Neil. Neil recommends this bestseller on the dark side of Big Data. The book highlights how algorithms and data models are used in many (sometimes hidden) facets of our life. While we think of these algorithms as being neutral, they often contain embedded biases which have a real impact on our lives and society (think student loans, mortgages, voter targeting). O’Neil argues that the rules used by these models should be more transparent, and we all need to become savvier about their impacts on our lives. An important read in this day and age.

The Four, by Scott Galloway. This one’s my pick. Written by an NYU business professor and serial entrepreneur, it’s a provocative and entertaining look at four of the world’s most dominant and influential companies today: Amazon, Apple, Facebook, and Google. These companies have arguably infiltrated our lives more than any others in history. Galloway digs into how they’ve done it, why people view them in a different light than their competitors, and whether anyone can challenge them. It’s a fun read. Buy it on Amazon. On your iPad. Then tell all your friends on Facebook.

Hillbilly Elegy, by J.D. Vance. Salman recommends this book which was named by the New York Times as one of “6 books to help understand Trump’s win”. The word Appalachians may conjure up images of beautiful mountains and wildlife, but this romantic view is a sharp contrast to the life of predominantly white Americans living in the area. The author provides a firsthand account of the social issues, including substance and physical abuse, poverty, and economic immobility, that are prevalent in the region. And he does so with humour, humility, and brutal honesty.

Bridge Basics 1, by Audrey Grant. Tom and his wife, Lori, are putting this book forward in hopes that more people will take up bridge. Audrey Grant, a Canadian who lives in Toronto, is an iconic teacher and makes the game understandable and fun. Tom tells me that Lori has taken to describing bridge as “an intellectual pursuit” in hopes of shaming people into trying it. Warren Buffett and Bill Gates play, as did Winston Churchill and Gandhi. Just sayin’.

Brick by Brick, by David Robertson. Paul recommends this fascinating account of the building, near self-destruction, and rebuilding (puns intended) of the company behind the world’s most famous plastic bricks — LEGO. The Danish company first rose to prominence in the 60’s, but faltered badly in the late 80’s and early 90’s due to mismanagement and the rise of video games. With new management and a renewed focus on innovation, the family-run company eventually regained its mojo and is as popular as ever today. Just watch out for those little suckers on the floor!

The Alice Network, by Kate Quinn. Lori (one of our Investor Specialists, not Tom’s wife) recommends this one. It’s a story about the courage and sacrifice of the little-known female spies of World War I. The Alice Network was a vast intelligence network run by a French woman (Louise de Bettignies) that provided valuable intelligence to the British. Quinn tells the story of some of the heroines involved in the network in this historical fiction bestseller.

The Performance Principle, by Mackenzie Kyle. This one is Sher’s choice. It’s a deep and entertaining dive into what motivates people in the workplace and how performance changing behaviour can be achieved. The book tells the story of Will Campbell, a newly promoted boss in charge of a manufacturing facility, who seeks the counsel of Martha, a 102-year old consultant, for help. “I loved this story on so many levels,” notes Sher.

If you’ve come across a great read lately, we’d love to hear about it. Let us know in the Comments section below.