If you wait for certainty ... 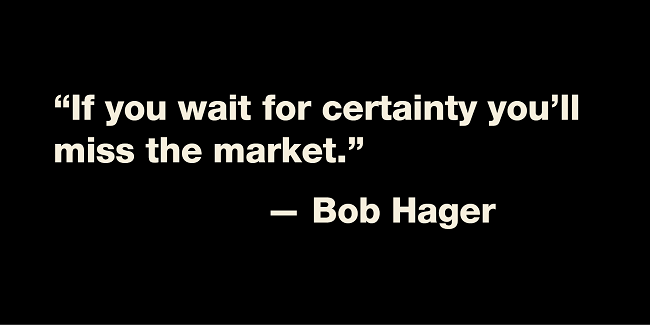 I saw a slide this week in an investment review that was titled, ‘What we’re watching to become more constructive on equities.’ Here’s the list of indicators this U.S.-based firm is looking at to determine when to make a higher commitment to stocks (along with explanations where necessary).

When I saw this list, I couldn’t help but think of something the late Bob Hager used to say. “If you wait for certainty you’ll miss the market.”

At Steadyhand, we’re also watching these factors, but as regular readers know, we never profess to know where the market is going in the short to medium term. Indeed, we don’t have a clue and neither does this firm, or anyone else for that matter. But we do know that Mr. Market looks ahead and tries to anticipate what is coming.

Bob refers to the fact that by the time the concerns and risks of the day are resolved, stock prices will already be significantly higher. Indeed, times of extreme pessimism and negative indicators often turn out to be good buying opportunities, as Scott pointed out in his Is it time to ‘start the car’? piece last month.

It’s our belief (Salman, our fund managers and me) that we should allocate clients’ capital to stocks that we think have an attractive long-term return based on their competitive positioning and the price we’re paying. We don’t know what road the stocks will take to achieve that return, and at the risk of sounding cavalier, we don’t spend any time trying to figure it out.