Saga of the Cariboo Camels 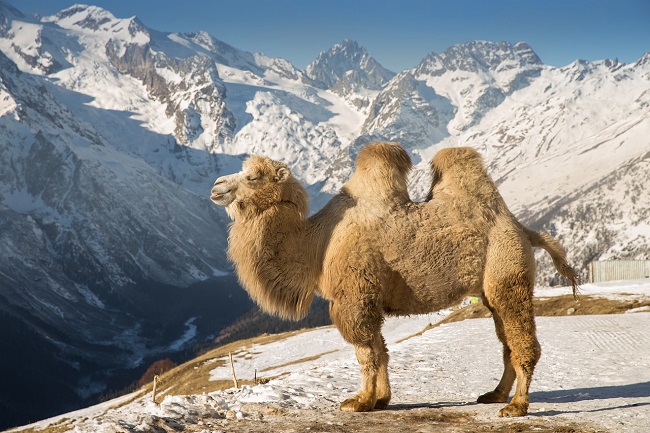 If you’ve ever been to the Cariboo Chilcotin region of B.C., you’ve probably had a run in with a camel. Or you would have in 1862, that is.

When gold was discovered in the area in the mid 1800’s, a few enterprising businessmen got together and purchased 23 camels, thinking they would be ideally suited for hauling equipment and supplies to the gold fields. Seemed like a good idea considering that camels had been successfully utilized as pack animals at the time by the U.S. army.

It didn’t work out so well though. The two-humped beasts (the entrepreneurs chose the Bactrian breed rather than the one-humped Dromedary) trashed their feet on the rocky roads, weren’t shy of kicking anyone nearby, didn’t mix well with the local wildlife, and ate the miners’ Levi’s.

A little over a year into the venture (1863), the camel train was retired and the animals were abandoned. Apparently, some were taken in as pets, others succumbed to the cold winters, and a few ended up on dinner plates. Today, a bridge in Lillooet is named “Bridge of the 23 Camels” as a nod to the Bactrians’ colourful past.

One saving grace of the B.C. camel saga is that the entrepreneurs realized their miscalculation early on and cut their losses. Had they prolonged the venture, many more camels could have suffered a similar fate to the ‘Cariboo 23’ and the region could look much different today (legend has it, there’s still the odd camel sighting).

After a year like 2022, we’ve all probably got a Cariboo camel in our portfolio. What may have seemed like a good investment idea in theory didn’t work out so well in practice. As more speculative investments started racking up huge returns early in the pandemic, there was a very real temptation to stray out of our risk comfort zone or diverge from our plan and buy into the hype behind cryptocurrency, unprofitable tech companies, or other shiny objects of the day. Alas, the oasis has dried up and returns evaporated.

But don’t beat yourself up too much over a mistake or ill-timed investment. Learn from it. Get back to fundamentals. Reset.

A portfolio that’s littered with slipups of the past will be tilted from its intended structure, which can weigh on future returns. As you review your investments this year, think of the 8-foot ungulates roaming the Cariboo a century and a half ago. Take a critical eye and if you conclude that your thesis on a holding is flawed or realize that something doesn’t fit with your investment approach, set your camels free and move on.

No doubt, it can be painful to admit a mistake and sell at a loss, but it will set you up for greener pastures ahead. And lean on a lesson from the early Chilcotin pioneers: don’t drag it out.