My wife is a realtor and got an “urgent notice” last week from a mortgage broker. The gist of it: rates are going up — fast — so make sure your buyers have a hold on one. The posted 5-year fixed rate offered by the big banks now starts around 3.59%, which is up from 2.59% just a month ago (and less than 2% a year ago). 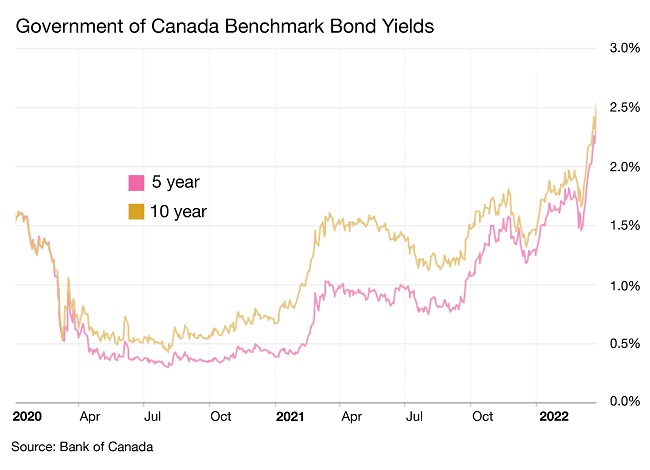 These are big moves, especially considering they’ve occurred over just 12 weeks. The Bank of Canada raised its key short-term lending rate this month (from 0.25% to 0.50%) for the first time since 2018. The U.S. Federal Reserve did the same and suggested six more increases are to come by year-end. The moves are being made to help combat surging inflation and pull back some of the stimulus that has helped prop up the economy throughout the pandemic.

Bond investors have felt the impact of the surge firsthand. When interest rates and yields rise, bond prices fall. So far this year, the Canadian bond market has dropped 8% and is on pace to turn in its worst quarter in recent memory. Investors aren’t accustomed to this. Bonds have long been the stable part of portfolios, cushioning the blow when stock markets fall. This relationship hasn’t held up this year.

The situation has some investors questioning their exposure to bonds and wondering what to do going forward. Our advice: don’t pull the plug on the asset class. Hold a pared back weighting if you choose, but don’t give up on bonds altogether.

We have held a lower-than-target weighting in bonds in our Founders Fund for quite some time due to the prevailing low interest rate environment (our current weighting is 28% vs. our long-term target of 35%), but we still see the value that bonds serve in a diversified, balanced portfolio. In fact, we’ve increased our weighting lately (it was as low as 23% early last year).

Further, while rising rates have a negative impact on bond prices, the flip side is that new issuers are obligated to offer securities with higher interest payments. As these bonds are incorporated into a portfolio, the higher income streams help to offset the impact of weaker prices.

Are the days of cheap money over? It's fair to say that the lowest lending rates we’ve seen in a generation (maybe a lifetime) are probably behind us. Central banks have made clear their intention to bring short-term rates back up to more of a ‘neutral’ level over the course of the next 18-24 months, which is somewhere in the neighbourhood of 2.5%. This is certainly higher than today’s rock bottom rates but is still low based on historical measures.

But future rate increases aren’t written in stone, nor should we discount that rates could be notably higher than forecasted by mid-decade.

The reality is that bond investors should prepare for a period of subdued returns as interest rates are poised to edge higher. But bonds still serve a purpose in many portfolios and higher rates don’t mean you should head for the gates.