Investors have subsidized our Uber rides, Spotify tunes and Netflix binging — but maybe not for much longer 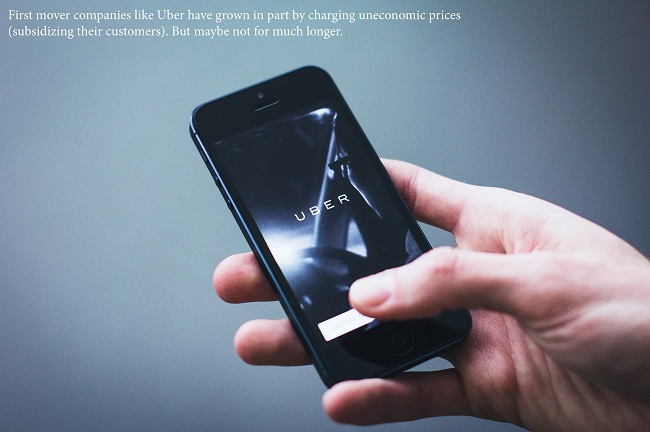 This article was first published in the National Post on February 5, 2022. It is being republished with permission.

Is the era of capital market subsidies nearing an end? I’m not referring to governments bending over to investment firms (which happens too often), but investors subsidizing customers.

Let me explain with a personal story. My wife Lori and I spent time in London three years ago. We had an ongoing debate as to whether to use black cabs or Uber. Lori wanted to support the well-trained local drivers and I, well, I wanted to book with the app and save money.

In a desperate effort to get my way, I told her that if we used Uber, we were being subsidized by rich venture capitalists from Silicon Valley. She liked that, and I got my way a few times at least.

What I was referring to is a business model that has been repeated many times during the past decade: be the first mover in a business with a large potential market; charge uneconomic prices to build market share; garner a rich valuation based on sales growth; invest freely in geographic expansion and new products; and try to monetize the customer base after scale is achieved.

Uber is a prime example of this. The company has been revolutionizing (or, perhaps, evolution-izing) the stolid taxicab industry. Investors got excited about this and provided Uber with cheap equity and debt capital whenever it was needed. The money came with a mandate: do what you must to become the dominant force in ridesharing and food delivery, expand geographically and develop the next super app. Also, importantly, don’t worry about making money.

The flow of capital allowed Uber to invest in technology (and lawyers) and undercut traditional taxis on price. Put another way, patient, growth-oriented investors subsidized our rides and food delivery.

Uber is not alone in pursuing this strategy. An abundance of cheap capital allowed Netflix to invest multiples of its earnings to produce new content to attract subscribers. In the process, it created a content war. As a television viewer, I say: Thank you, Netflix shareholders.

Spotify, a favourite of mine, has been able to focus on subscriber growth and become a leading player in the music industry. In this case, willing investors (and unwilling artists) allow me to quench my thirst for new music at a fraction of what it used to cost.

There are other emerging companies where customers have benefitted from investors’ focus on growth. They include Zoom, WeWork, the “buy now, pay later” finance companies such as Affirm Holdings, and anything involving electric vehicles. Let’s not forget the company that started it all: Amazon.

Early on, Jeff Bezos pushed back on Wall Street’s demands for profitability, convincing analysts that going full bore on expansion would generate more wealth in the long term. He used low prices and previously unheard-of delivery levels to build scale. And yet, even today, the most dominant retailer on the planet makes only modest profits in relation to its revenues.

Amazon’s success made it possible for investors in other disruptors to stomach large losses, weak governance (multi-voting shares giving the founders long-term control) and a lack of fiscal discipline. Not even the spectacular failure of WeWork dulled the enthusiasm.

This dose of reality means there will be less capital market largesse to share with customers.

If you’re thinking that much of the funding for these companies came from private investors, you would be right, but private-equity firms will only invest in a startup or disruptor if they believe they’ll be able to sell to public shareholders at a significantly higher price. They need to be compensated for the risk that goes along with early stage investing and a lack of liquidity.

There is an enormous amount of private capital to deploy in the next few years. Entrepreneurs will be in the driver’s seat for a while longer and, happily, there are stories almost every day of innovative, creative Canadian companies being funded. But the subsidies that we as consumers have benefited from will abate, and then I’ll have to figure out another argument for ordering a car with my phone.