Cryptocurrencies, SPACs, lumber and more — the second quarter was filled with violent reversals 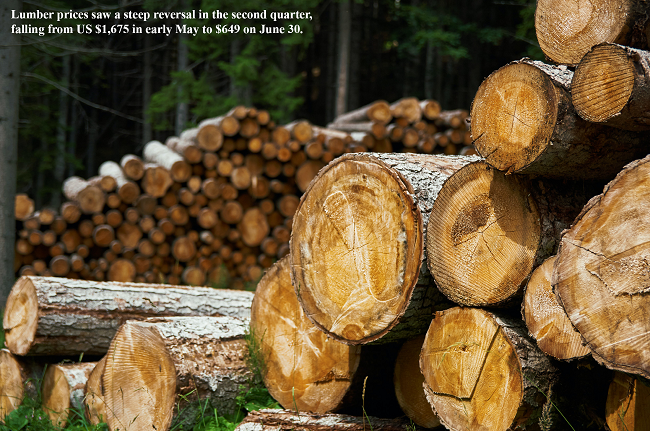 This article was first published in the National Post on July 17, 2021. It is being republished with permission.

A week before every quarter-end, our team starts getting ready to report to clients. To publish a week after quarter-end, we need to meet with fund managers and write commentaries prior to the final numbers being posted.

It’s a routine that is sometimes, well, routine, but not last quarter. It was a period of abrupt turnarounds, many of which accelerated right up to the closing bell on June 30. Indeed, the theme for the quarter was trend reversal. The issues most talked about at the beginning of April ended up going the other way.

Let’s take a look at where the U-turns happened, starting with the most important one: interest rates.

Rates were trending higher as the quarter began, and expectations were for further increases. The yield on the Government of Canada 10-year bond had increased from 0.67% at the beginning of the year to 1.55% on March 31. Well, April Fool. The yield today is lower at 1.26%.

For investors, this meant that bond funds, which were a drag on returns in previous quarters (remember that when rates rise, bond prices decline), made a contribution again.

The rate reversal didn’t just impact fixed-income investments. It also contributed to an abrupt change of leadership in the stock market. Late in the quarter, growth stocks took over from the reopening stocks that had been carrying the baton since last fall.

This shift was rooted in mathematics. Lower rates make earnings in the distant future more valuable in current dollar terms, which particularly impacts fast-growing companies that are losing money now, but promise a profitable bounty in the years ahead.

Interest rates were bucking another trend change. Inflation broke from its long-term pattern (what inflation?) and jumped above 3%. Of the reversals, this was the most anticipated, because the numbers were based on this year’s growing economy versus last year’s locked-down one.

It was also well known that inventories were low and supply chains remained stubbornly sticky. What isn’t known is whether the price surge will be transitory or persistent. That’s today’s hot topic (and “transitory” is the most overused word).

There were other turnarounds in the second quarter.

Cryptocurrencies were on fire until Chinese regulators clamped down and Tesla founder Elon Musk did an about-face on Saturday Night Live. Bitcoin (high: US$64,863) is now about 50% below its high and Dogecoin (high: 73.76 cents U.S.) is down more than 75%.

Regulators also complicated the love affair with Chinese companies listed in the United States. Just days after Didi Global, the ride-sharing giant, went public on the New York Stock Exchange, China’s internet watchdog suspended new user registrations for its app. This action added to an already hostile regulatory environment for Chinese tech giants. Didi is now trading about 15% per cent below its US$14 issue price.

Meanwhile, the temperature around special purpose acquisition companies (SPACs) dropped from boiling hot to tepid. There was a flood of new issues and investors started to figure out that the only ones getting rich from SPACs were the already-rich promoters.

The biggest reversal of all was welcomed by those who are building a home or adding a deck. Lumber has traded like an option on a mining penny stock this year. It started at US$649, rocketed to US$1,675 in early May, and then fell off a cliff, closing at US$649 on June 30.

As someone who has been writing quarterly reports for 30 years, I can tell you that it’s not uncommon for the worst stock (or asset class) in one quarter to be the best performer in the next one. It happens all the time. The turnarounds in the second quarter, however, were more important and widespread, and at times head scratching.

The long list can partially be explained by the pandemic, and the economic and market extremes that followed. And, no doubt, cheap money is encouraging risk-taking by individuals and corporations. These factors go a long way to explaining why there was so much air under cryptocurrencies, SPACs and lumber.

It’s harder to understand the sudden change of leadership in the stock market, and the decline of interest rates at a time of rising inflation. I guess that means we’ll have something to write about next quarter.