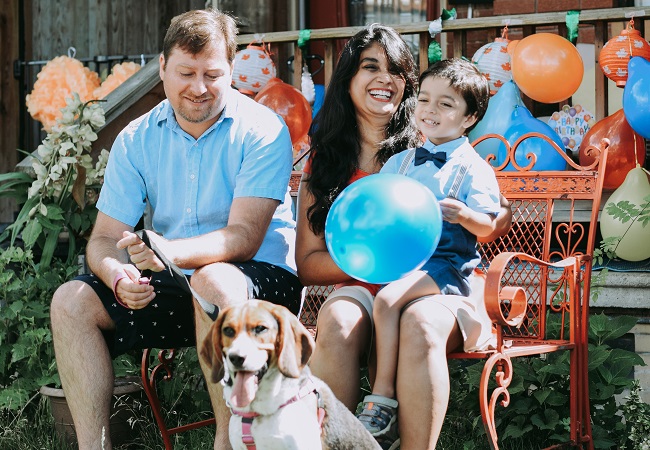 We’ve been running a blog series this year highlighting what we feel is our biggest competitive advantage — our people. In this post, you’ll get to know Evan Parubets a little better, one of our Investor Specialists in the Toronto office.

Evan joined Steadyhand in 2016 and works with our clients in an advisory capacity, helping them build and manage their portfolios.

He has extensive qualifications and knowledge in the field of financial planning, coupled with 20 years of industry experience. In addition to completing the Professional Financial Services program at Fanshawe College, Evan hangs on his office walls the Certified Financial Planner (CFP), Fellow of Canadian Securities Institute (FCSI), and Chartered Investment Manager (CIM) designations. While there’s scant room left for art, he’s made sure to carve out space on his desk for pictures of his other passions — his wife Tuli, young son Elan, and dog Eike (a 1 ½ year old beagle). And coffee. I don’t know anyone who loves it more. Verona with a little sugar and milk is his go-to.

Raised in Toronto, Evan holds the Maple Leafs dear to his heart and loves the city’s vibrant food scene. A few of his recommendations: Hopper Hut in Scarborough (don’t expect anything fancy, but the Kottu Roti and Dosa are amazing) and Indie Ale House in the Junction (great beer made on site and the best fried chicken in Toronto). He also likes to jump on his bike when he can for a leisurely ride along Queen St. If he’s got his earbuds in, Mumford & Sons will be at the top of the playlist. If you’re ever around High Park on the weekend, there’s a good chance you’ll see him, son and beagle in tow.

Having just turned 40 last year, Evan’s got a lengthy investment time horizon and has a growth-focused portfolio. His Strategic Asset Mix (SAM) is 100% stocks. He holds our Builders Fund to get there. An all-stock portfolio isn’t suitable for a lot of investors, but Evan’s comfortable and well versed in the associated volatility that comes with it.

It goes without saying that 2020 has been an unusual year on many counts. Here’s what stands out for a fortysomething financial guy.

“Surreal.” Everything happened so suddenly. I remember the NBA halting all games, and that’s when it suddenly became very real. I was on the subway the day before everything shut down and you could feel the city’s anxiety. The shift to working from home was a struggle initially. I’ve got a young son and we had to deal with his daycare shutting down and all the things that other parents were faced with. Eventually we found our groove though and got into a routine. Things got progressively better as the weather improved and we could spend more time outside. My make-shift office on the patio was a bonus.

What was going through your mind when the market was down over 30%?

I was surprisingly calm. People in the business tend to remember a certain downturn vividly (Tom frequently references Black Monday in 1987). That period for me was 2008. Having gone through the global financial crisis and then seeing what was going on now, I realized that this time was unique. Knowing that the banking system was in good shape, I felt better that this downturn wouldn’t be as bad, although I wasn’t naïve about the grim outlook for certain businesses and sectors.

“Stay the course” sounded very cliché when the world was melting down. What advice or perspectives were you providing anxious clients?

I’d try to tell a story of what happened in previous downturns, how things felt at the time, and how nobody knew what was going to happen on a particular day. In 2008, Lehman was suddenly gone one day, then AIG had to be rescued, then General Motors, etc. Then I’d take them to 2011 with the European financial crisis and the U.S. government hitting its debt ceiling, and the panic that ensued. Then again in 2016 with Brexit and Trump. The point is that scary events happen all the time, but markets bounce back, and we can’t let the emotion of the situation take over the rational part of our minds.

How’s your stress level, and what have you been doing this year to relax and recharge?

2020’s been a tough year and we’ve all dealt with a lot of stress. I’ve actually been busier than ever, so I haven’t had a lot of time for myself. I have found, though, that a great way to blow off some steam has been getting on the bike and going for a ride. Not so much now, but it was a great stress relief in the summer. Having lunch with my wife more often has also been awesome. And being able to walk my son to and from daycare [when it opened again] has helped me recharge the batteries.

What lessons will you take away from 2020?

I’ve underestimated how much we need social contact and being able to see friends. I’ve also realized that my commute was oddly therapeutic. I’m actually looking forward to getting back that 30 minutes of solitude at some point. Then there’s travel. Oh, how I miss it. I think I’ll value it a lot more once we’re able to go to new and exciting places again. Lastly, it’s been a great lesson in the resiliency of both markets and people. We’ve all heard the phrase “this too shall pass” a lot this year, but I’ve really taken it to heart.

If you’d like to talk investing or anything financial-related with Evan, you can reach him via our toll-free number (1-888-888-3147), or you can schedule a time for a more in-depth phone or video call through the booking feature on our website.