An In-depth Look at the Canadian Housing Market

In the last couple of weeks, there has been two excellent reports published on the Canadian housing market - one by the Canada Mortgage and Housing Corporation (CMHC) and the other by RBC Global Asset Management. Both are good reads for people who want to dig into the detail and get a better understanding of the many factors that drive housing prices and activity.

Both reports draw conclusions that are consistent with what the real estate industry and banks are saying – there are some signs of strain in the market, but the risks are more benign than what the doomsayers like me are suggesting.

CMHC’s fourth quarter assessment provides an overview of where we are today (price trends, sales to listings ratios, unabsorbed inventory levels and vacancy rates on rental units). Overall, the report concludes that the Canadian market is not overbuilt and overheated, and only moderately overpriced.

Despite the conclusion, I find the CMHC report less useful in addressing what lies ahead. It uses some sophisticated modeling to measure current valuation, but the interest rate cycle is not discussed. Given that house prices are highly geared to changes in interest rates, some sensitivity analysis would have been useful.

The RBC report is very thorough and attempts to address all of the doomsayers’ concerns. There are many interesting charts, including the scorecard below: 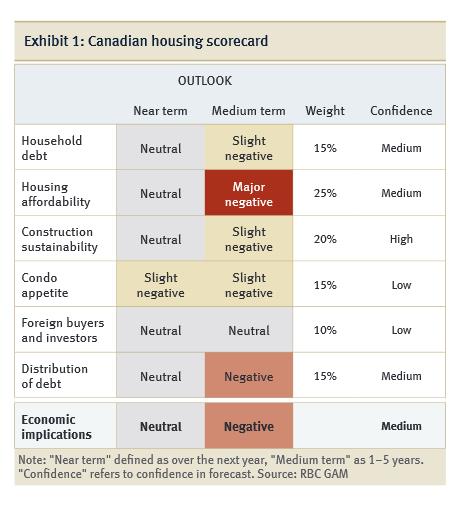 I find the author’s conclusion (Chief Economist Eric Lascelles) to be surprising in light of this scorecard. He says, “Broadly, the near-term outlook appears benign, tilting only slightly in a negative direction.” Yes, the near-term is holding up OK, but there’s nothing benign about his 1-5 year outlook.

I learned a lot from both reports, but they didn’t change my view. There are a number of factors that weren’t discussed or need more emphasis:

Stay current on Steadyhand news and views through our monthly newsletter.